Curious about the best places to visit in Kazakhstan? Kazakhstan is a vast country largely located in Central Asia, with parts of it – in Eastern Europe. It is the 9th largest country in the world by area, but it’s very sparsely populated.

It’s a mix of the new and the old. Traditional yet cutting-edge. And in our opinion, Kazakhstan is one of the most interesting countries in the world.

Due to the abundance of natural resources, such as oil and gas, Kazakhstan is a fast-growing country with modern cities. Kazakhstan is also the most economically advanced of the ‘stans’, and thus slightly more expensive than its less developed neighbours. It is not a very popular tourist destination (yet), and some of its most spectacular landmarks are located in remote places.

So Kazakhstan is the perfect place for those travellers who like to get off the beaten track.

But what exactly to see in Kazakhstan?

To help you with the task of planning we’ve created this list of some of the best places to visit in Kazakhstan.

7 best places to visit in Kazakhstan

Kazakhstan is a land of dramatic landscapes, offbeat sights and amazingly beautiful religious buildings. Here are some of the best of its sights. 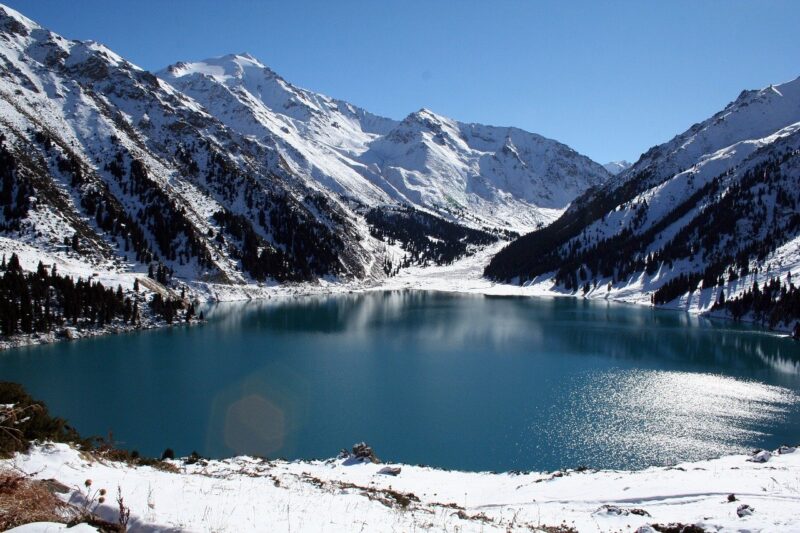 Almaty is the biggest city in Kazakhstan, and it served as the capital of Kazakhstan until 1997.

Almaty is the gateway to the amazing natural wonders in the area.

As the city is located in the foothills of the mountains, you can easily escape the buzz of the city and immerse yourself in stunning nature. Take a public bus or taxi to Ile-Alatau National Park where you’ll find plenty of hiking trails that will lead you to the hills.

One of the hiking trails goes to Mount Tri Brata (Three Brothers) which is known for its three large cliffs. At the top of Mount Tri Brata you can enjoy the sweeping views of Almaty.

Big Almaty Lake, one of the most popular tourist attractions in Kazakhstan, is located very close to Almaty.

A part of Ile-Alatau National Park, Big Almaty Lake is a natural alpine reservoir. The lake is 2511 meters above sea level, 1.6 km in length and from 0.75 to 1 km in width. This picturesque turquoise lake with a backdrop of mountains is one of the best places to visit in Kazakhstan. 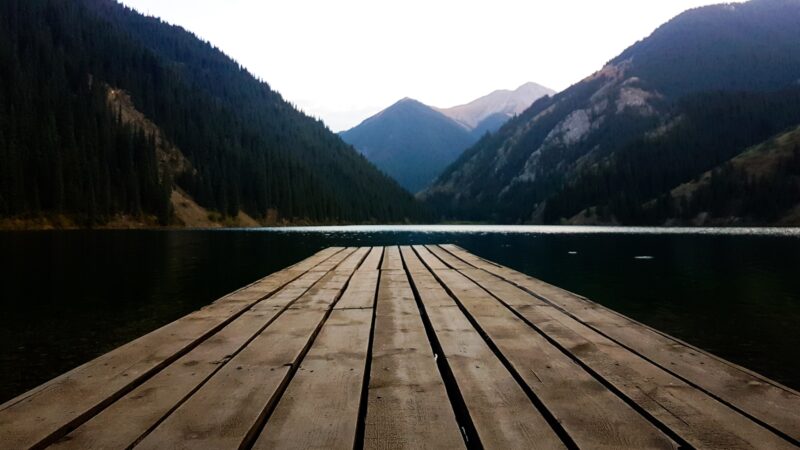 Kolsai Lakes is a set of three lakes located on the north slope of the Tian Shan Mountains.

Lower Kolsay Lake is accessible by road and has guest-houses and campsites. It is allowed to swim there but be warned — the water is very cold.

In order to visit the third lake, you have to have a permit because the lake is located very close to the border with Kyrgyzstan. 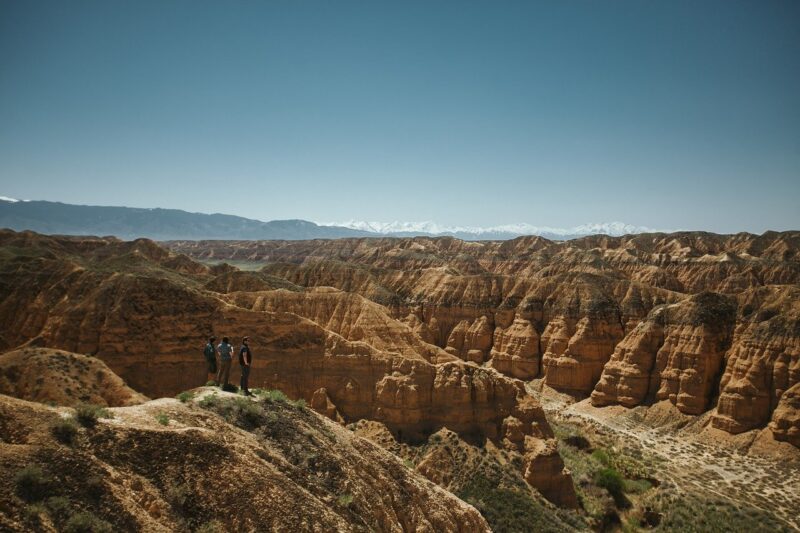 Situated in the flat steppe some 200 km east of Almaty, Charyn Canyon is a place where you can enjoy out-of-this-world landscapes.

Charyn Canyon is a unique natural object with weird and colourful rock formations in the form of sculptures, towers and animals.

The most interesting rock formations can be found in the branch canyon known as the Valley of Castles (Dolina Zamkov).

Roughly 90 km long, and with a depth of 150 to 300 m, Charyn Canyon is equally impressive as the much larger canyons all around the world.

Thanks to its unique landscapes, Charyn Canyon definitely is among the best places to visit in Kazakhstan. 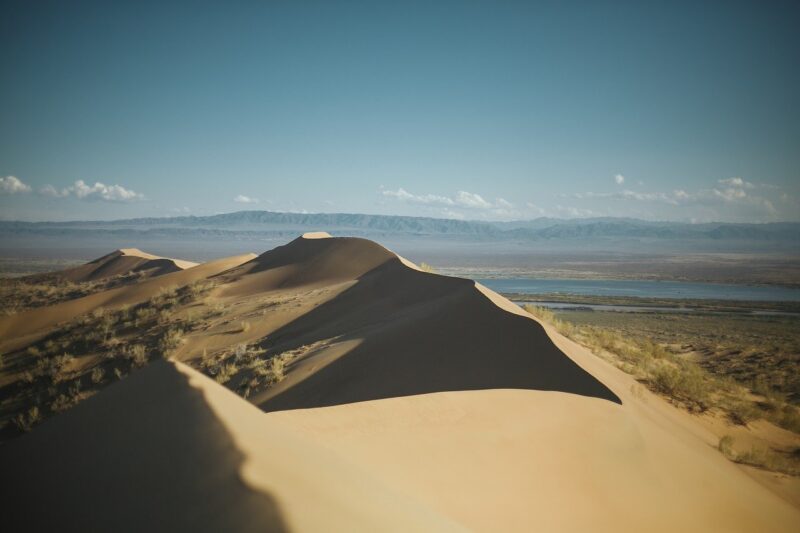 Just like Charyn Canyon, Altyn-Emel National Park is a unique place where you can get that out-of-this-world feel.

Altyn-Emel National Park is the largest reserve in Kazakhstan and a part of UNESCO’s world heritage site.

It consists mostly of desert and rocky terrain, but probably the most famous part of the National Park is the huge Singing Dunes. They make a low vibrating sound when the wind moves the sand. The sounds from the dunes can be heard even several kilometres away from their location. 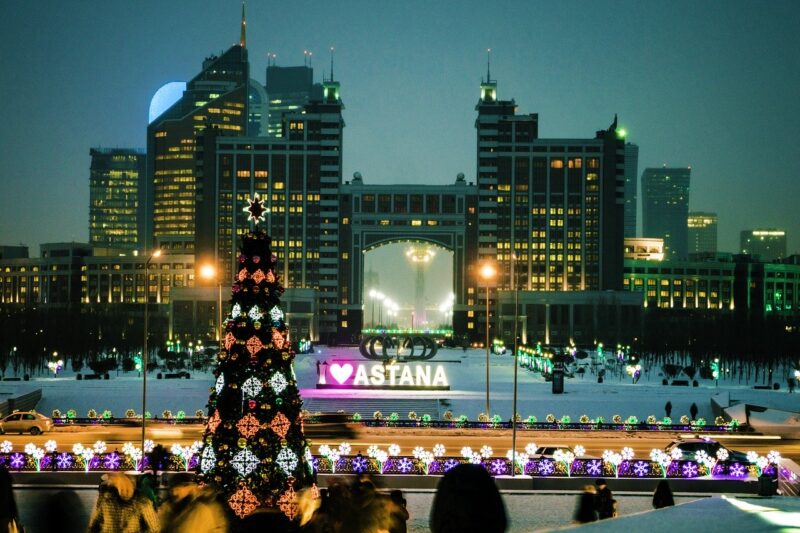 Nur-Sultan, known between 1998 and 2019 as Astana, is the capital city of Kazakhstan.

It is located in a spacious, very flat and semi-arid steppe region.

Unlike its desolate surrounding, the city is modern and glitzy. It has been transformed into a 21st-century metropolis with futuristic fantasy architecture.

Admiring the impressive and futuristic buildings of Nur-Sultan is one of the best things to do in Kazakhstan.

With the height of 210 m, Emerald Tower 1 business centre is the highest building in Nur-Sultan.

The Palace of Peace and Reconciliation and Bayterek tower are some of the most interesting buildings in Kazakhstan. 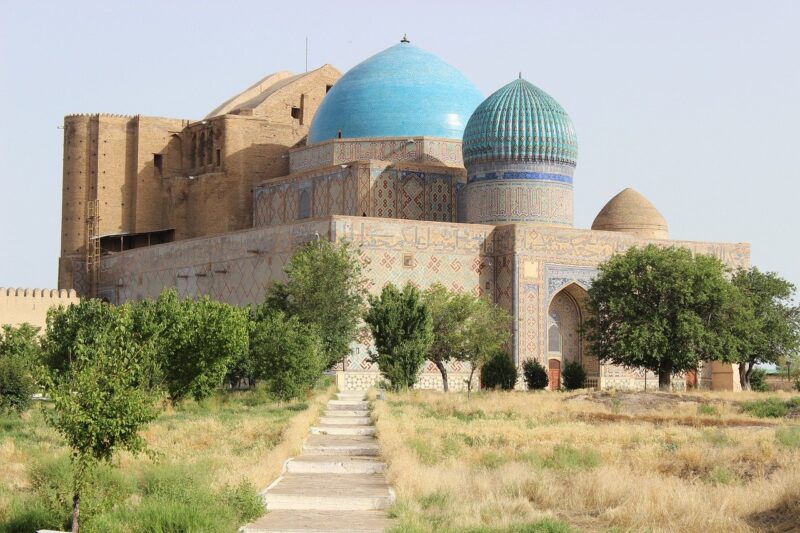 Turkestan is an ancient city with a history dating to the 4th century. It’s home to numerous sacred and well-preserved sacred sites, and a part of the Silk Road once passed through Turkestan.

Exploring the beautiful Timurid architecture in Turkestan is one of the best things to do in Kazakhstan.

Dating back to the 15th century, the mausoleum of Khoja Ahmed Yassawi is among the most impressive historical buildings in Kazakhstan and a UNESCO World Heritage Site.

The smaller mausoleum of Rabigha-Sultan Begum is a replica of the 15th-century original which was torn down in 1898.

The Aisha Bibi, a 12th-century mausoleum, is also a popular destination among tourists and pilgrims. It is locally famous as a monument to love and faithfulness.

Mount Sherkala, Valley of Balls & the rest of Mangystau Region 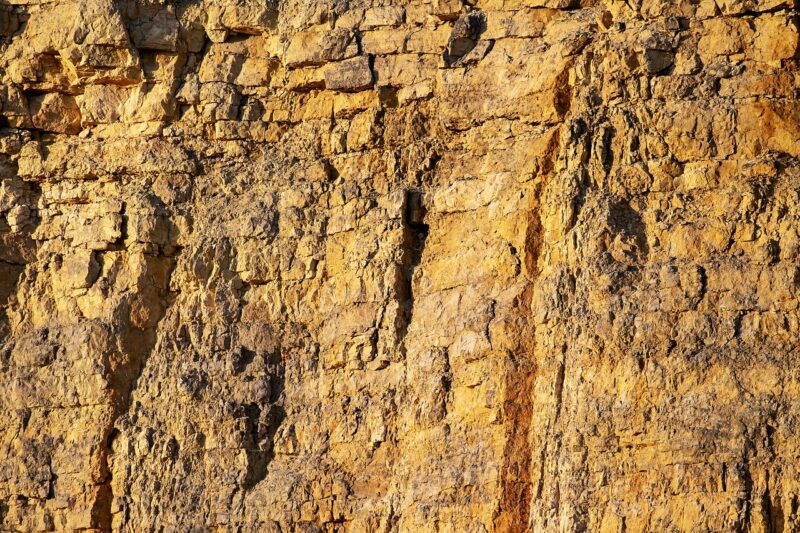 Mount Sherkala is a mountain in Mangystau Region and one of the top sights of the area. It is located some 170 km from Aktau, a city located on the Eastern Shore of the Caspian Sea.

Formed of clay, limestone, and chalky rocks, Mount Sherkala is a lone mountain with an unusual shape resembling a yurt.

Another impressive and unique site not far from Sherkala is the Valley of Balls (Torysh). It’s a desolate valley with large, unique, ball-shaped rock formations.

If you are not on a budget, join a guided multi-day tour around Mangystau Region. Parts of the region can be compared to Arizona. Especially the valley of Boszhira which will captivate you with its vastness and unusual rock formations. Bokty mountain, another spectacular landmark, is an unusual mountain unlike any other in Kazakhstan. 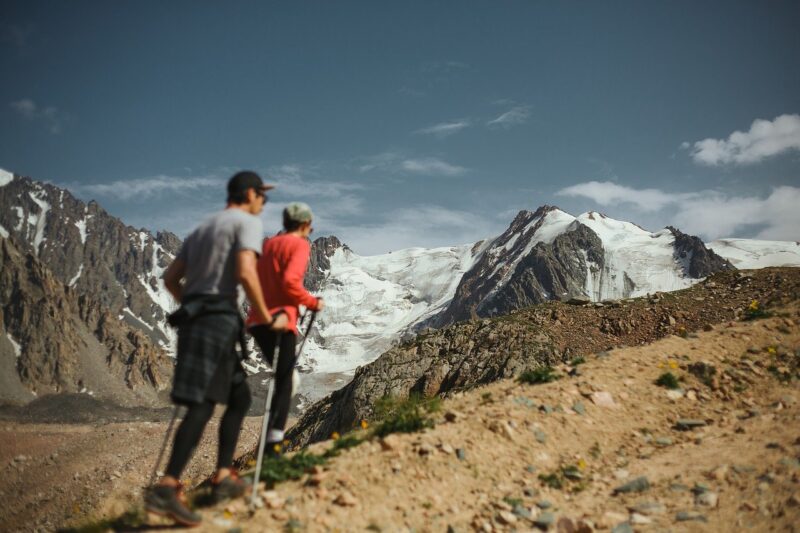 The post 7 best places to visit in KAZAKHSTAN appeared first on TravelFree.