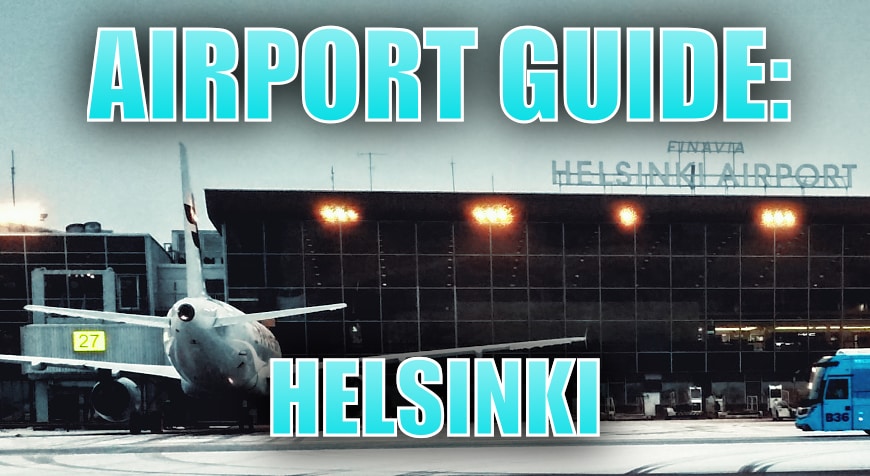 Helsinki Airport is the only airport that serves the capital city of Finland, Helsinki, and is responsible for 90% of the countries air traffic. With strong connections to long-haul destinations in North America and Asia, the airport has become a critical part of northern European aviation. No matter where you are travelling to or from, you will find all the information you need in our Helsinki Airport Guide!

The airport also goes by the name of Helsinki-Vantaa Airport due to its location being in the city of Vantaa, some 17km north of Helsinki. However, with only one commercial airport in use in Helsinki, the airport is often referred to as Helsinki Airport. There is also Helsinki-Malmi airport which was the main airport in Finland until the 1950’s when the Vantaa airport opened. Nowadays, Malmi Airport is for non-commercial flying and training.

The Finnish flag-carrier airline, and Oneworld member, Finnair has Helsinki as its hub. Finnair is the primary reason that Helsinki Airport has so many long-haul destinations, with the airline’s sprawling connectivity around the world. Helsinki Airport also plays a significant role for Norwegian Air Shuttle and SAS, with the fellow Nordic airlines further increasing the reach of Helsinki Airport.

Map: https://hel-map.finavia.fi/?language=en An zoomable interactive map which allows searching of amenities and facilities.

WiFi: Free WiFi is available throughout the airport. Connect to the “Helsinki Airport Free Wi-Fi” network

Apps: Helsinki Airport has a free app available on both AndroidandiOS. 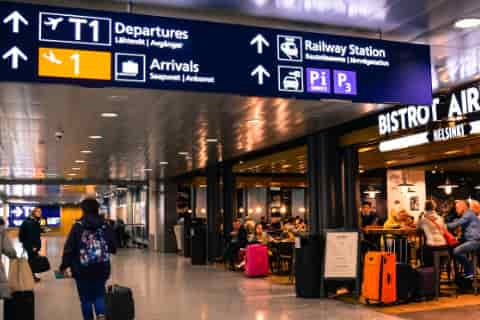 Helsinki Airport has everything travellers would need when moving through an airport, and caters for technology-heavy travellers well with charging points and fast WiFi throughout the airport. Aside from keeping laptops, phones and tablets charged and connected, Helsinki also has free water refill stations, sleeping pods, spa services, a hair salon, duty-free shopping, restaurants, cafes, bars, fast-food outlets, luggage storage, currency exchange, ATM’s, family areas, and even toilets for pets!

For any frugal traveller who enjoys a hot drink, it’s easy to save money on a coffee or tea too. Helsinki Airport now has free hot water dispensers installed. Although it is not possible to take liquids over 100ml through security, there is nothing wrong with taking an empty container such as a flask through with a tea bag or instant coffee to drink on the plane or in the airport!

The airport also gives aviation enthusiasts plenty to do. There are exhibitions in place within the terminals such as an engine of a Convair 340. For a more ‘live’ experience, Helsinki Airport welcomes plane spotting and filming. There is a scenic terrace in the landside area of the airport (i.e. before security), towards the Hilton Hotel. Airside has options too for those who have passed through security or are awaiting a connecting flight with full details available here. Finally, for anyone who is at the airport on the mornings of Tuesdays, Wednesdays, or Thursdays, there is a 1.5-2hr tour available on request. Contact information to express interest in the experience is available on the airport website.

Sleeping on a budget within the airport is surprisingly do-able as there are several relaxation areas passengers can make use of for those happy to sleep in public, all open 24/7. There is a yoga area called ‘Maja Living Room’ at gate 52, the Kainuu Lounge at gate 31 with a comfortable floor, or the ‘Aukio’ installation at gate 40 that the airport advertises as a ‘Finnish Oasis’.

For those happy to pay for privacy, Helsinki Airport has many options. At gate 28 there are GoSleep Pods. These capsule chairs allow privacy, a safe place to store items, and USB chargers within the sleeping area. Prices start from €4.50 for an hour, and customers can rent pillows and blankets.

More traditional hotel rooms are also available thanks to three on-site hotels in the landside area of Helsinki Airport. The GLO Hotel and the Hilton Hotel both offer dayrooms for any traveller who does not need a room overnight. There is also the Scandic Hotel. Covered walkways connect the Scandic and Hilton to Helsinki Airport, while the GLO hotel is on the ground floor, under Terminal 2 Arrivals. All the hotels in the area, as well as the best prices for your dates of travel, are available here. 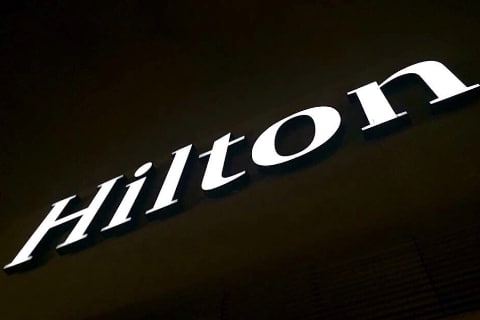 Shower facilities are not available for free in any areas of Helsinki Airport. The day room options mentioned above may be a good option for any travellers who would also appreciate privacy and somewhere to rest, as well as freshen up. For those who would prefer not to leave the departure lounge area though, several of the airport lounges have shower facilities. We list these at the bottom of our airport guides for reference.

Luggage storage is possible for travellers to use at Helsinki Airport with all lockers available in the landside area of the airport (i.e. before passing through security to reach departures). The maximum storage time is seven days, with rates available on a per 24hr basis. It is €5 per 24hrs for a small item (56x56x28cm) or €6 for a large item (86x78x36cm).

Terminal 1 is relatively small, and passengers won’t struggle to navigate their way around with only 15 gates in this section of the airport. Once clear of customs and the duty-free shop, most of the gates (1-13) will be to the right. On the other side of the duty-free shop are gates 14 and 15, as well as the walkway to Terminal 2.

Terminal 2 of Helsinki Airport is L-shaped with passengers walking into the corner of the L when they exit the duty-free shop that doubles as the exit of security. To the right from here are gates 16-24, and the walkway to Terminal 1. While to the left are the bulk of the gates and shopping facilities. Gates 25-39 are before any passport control while gates 40-55 are a little further of a walk away, and require passengers to pass through passport control. 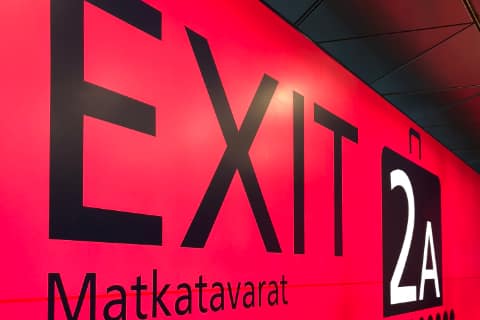 Bus: The airport’s primary airline, Finnair, also provides road service for passengers to reach Helsinki city centre. The Helsinki Airport bus has a direct route with no stops every 20 minutes or so. Tickets for this service are €6.80 and credit card is accepted. The local bus service is a cheaper, but slower option. Bus route 615 will take passengers to Helsinki Central Station in around 40-45 minutes for €4.50. A full schedule is available here.

Train: Following the completion of the Helsinki Airport station in 2015, the train provides a simple connection to Helsinki centre. There are two lines, I and P, that connect to the airport, but in reality, they are the same but running in different directions. The eastbound P line will get passengers to Helsinki Central Station in under 30 minutes. It will cost €4.10 for a single ticket to the central area. Tickets are available at newsagents or ‘HSL’ ticket machines at the train station (HSL is Helsingin seudun liikenne, or Helsinki Regional Transport Authority in English). There is also a mobile app that travellers can download and travel with. 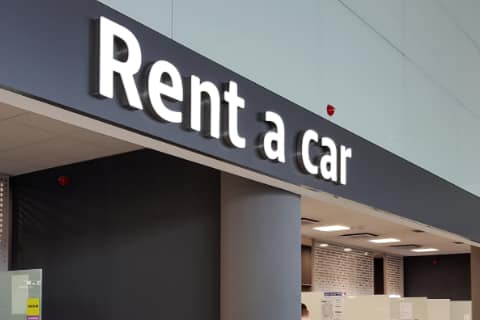 Taxi: Helsinki Airport partners with three taxi companies; Lähitaksi, Vantaan Taksi, and Taksi Helsinki. Each company has their pricing information on the information screens at the taxi rank outside the arrivals area (in front of T1, on the ground floor of T2). Passengers can expect to pay €50 for a one-way trip into the city centre with a journey time of around 30 minutes. Uber does operate at Helsinki Airport too with fares starting at roughly €35.

For passengers travelling through Helsinki Airport for a connecting flight, the airport is simple to navigate and has fast connections. Any flights that are from booking with the airline directly, or with an Online Travel Agency, and have a single itinerary will account for the connection time. Any checked luggage will move from one plane to another automatically. Passengers will not need to worry about missing the connecting flight as the airline will need to arrange onward travel or accommodation if the first flight suffers a delay leading to a missed connection.

On the other hand, if the passenger has purchased two separate tickets, even with the same airline, then they are performing what is called a ‘self-transfer’. This means that each flight gets treated independently, and the second flight will not know that the passenger is even performing a connection. The passenger must check themselves in on both flights separately. If they are travelling with checked luggage, then they must reclaim this at Helsinki baggage reclaim before checking it back in again, adding additional time to the connection. 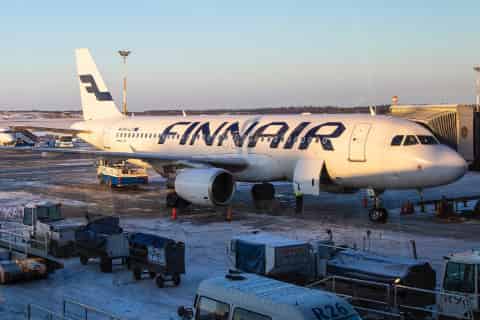 If the arriving flight, departing flight, or both is from a non-Schengen country, then additional time must be spent passing through immigration too, which can add significant delays. Although it is possible to find cheaper flights this way sometimes, passengers do so with the risk that they could lose out if their first flight has any issues at all delaying its landing.

The minimum connection time at Helsinki Airport is only 35 minutes; one of the quickest in Europe. However, this only applies to passengers who are not self-transferring, and it is an ‘at best‘ time for Schengen to Schengen connections. For any travellers who need to collect luggage and check it in once again, they will need to pass through security and possibly immigration leading to more time. In these cases, we would recommend leaving 90 minutes between flights at a very minimum, and if possible, over two hours.

Helsinki Airport is a comparatively small airport, and the limited number of lounges available demonstrates this. At their home airport, Finnair has the lions share of lounges. With the flag-carrier operating more flights than any other airline from Helsinki, this will suit passengers fine. For those not flying with a Oneworld airline, there are a couple of airline-unaffiliated lounges available also, allowing the benefit of lounge access for a fee. The terminal layout is free-flowing when airside, with passengers free to move from Terminal 1 to Terminal 2. However, some lounges at Helsinki Airport are available to passengers travelling to non-Schengen destinations only.

SAS Lounge
Located opposite of gate 13

Aspire Lounge
Located on the second floor, opposite of gates 27/28

Finnair Lounge (this lounge has shower facilities)
Located on the second floor, above gates 23/26

Plaza Premium Lounge (this lounge has shower facilities)
Located on the third floor, near gate 40