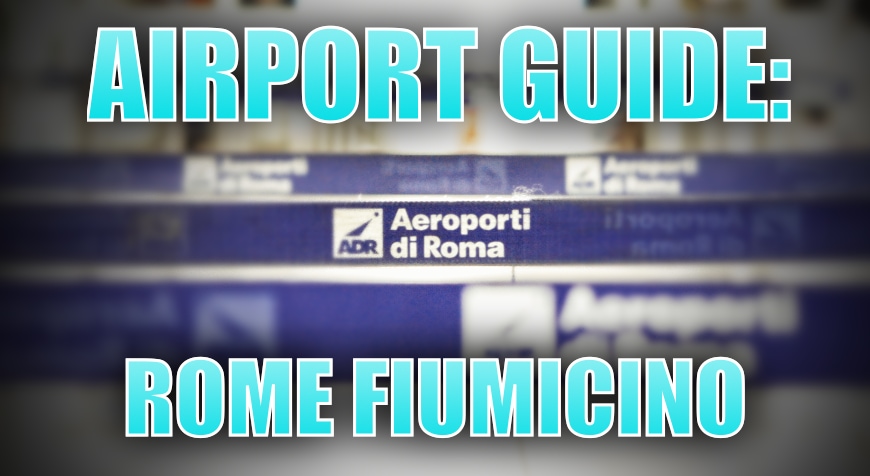 Rome–Fiumicino International Airport is the larger of the two airports in Rome, and is the busiest airport in Italy. The airport also goes by Leonardo da Vinci Airport, after the famed Italian painter who drew plans for primitive flying vehicles in the 1400s. Whether you are planning a trip to Italy, a trip departing from Rome, or simply catching a connecting flight at Fiumicino Airport, read our in-depth guide to find out everything you need to know!

Rome Fiumicino Airport is the 11th busiest airport in Europe (2019 figures) with over 43m passenger movements. The other airport in Rome, Ciampino, targets budget airlines and only fields ~6m passengers. However, Fiumicino hosts low-cost carriers also and serves as a hub airport for Spanish budget airline Vueling. But the airports leading airline by far is the Italian flag-carrier Alitalia who has over triple the number of flights compared to any other airline at the airport.

Fiumicino is the name of the town where the airport is situated, around 30km southwest of Rome itself. The full local name of the airport is Aeroporto Internazionale di Roma–Fiumicino “Leonardo da Vinci”. It replaced Ciampino Airport as the primary airport for Rome in 1961, and while Ciampino still serves customers, Fiumicino is unparalleled in Italy in terms of air transport.

Map: http://www.adr.it/web/aeroporti-di-roma-en-/pax-fco-airport-map – A list of PDF maps for all arrivals, departures, and boarding gates

WiFi: Free WiFi is available throughout the airport. Connect to the “Free Wi-Fi” network. Speeds are up to 2Mbps unless users install the Aeroporti di Roma app below

Apps: Rome Fiumicino International Airport has a free app available on both AndroidandiOS. 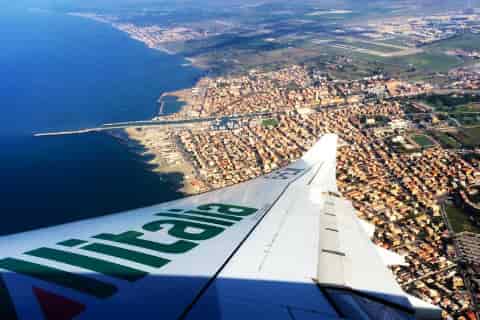 For those travelling as a family with children, Rome Fiumicino airport caters well. There are family washrooms throughout the airport, as well as nurseries with changing facilities, cots, and baby bottle heating facilities. For older children, there are play areas to keep excited children entertained. Look in the arrivals area of Terminals 1 and 3, or boarding gate area E of Terminal 3 for these. For those not travelling with a family and instead want to look after themselves, a personal shopper

service will help travellers to make sure they leave the airport with a well-stocked wardrobe.

Sleeping is possible without leaving Rome Fiumicino Airport thanks to the ‘Air Rooms’ from the HelloSky company. These rooms are for day use with three and six-hour blocks possible. Each room has a shower, bathroom, and either a double or single bed. Passengers can use these as a regular overnight hotels/" 3142 target="_blank">hotel also but will likely find cheaper options outside the airport. Prices start from €70 for 3 hours in a single room, to €120 for 6 hours in a double.

There are many more options nearby to the airport with free shuttles operating from many. The very closest is the Hilton which connects to the airport by a moving walkway and additionally offers a free shuttle service to Rome city centre too. Check all the options and all the prices for your dates by entering them here to find the best rates possible.

Shower facilities are not available for free at Rome Fiumicino Airport, but for passengers seeking to freshen up, the service of HelloSky will be the best choice. There are €20 showers, inclusive of toiletries and a towel, for those who are happy to pay. The alternative solution is to make use of the various airport lounges at the airport, which have showers as a service. The Lounges section at the bottom of this guide will provide full details of the lounges that include shower access.

Luggage storage is in Terminal 3’s International Arrivals area for passengers looking to move around without their bags in tow. The services are open from 6:30AM until 11:30PM with payment collected upon retrieval of any items. A flat fee is in place with each item of luggage costing €10 per 24 hour period of storage. Note that the €10 is for any period of the 24 hours, so 1 hour of storage costs the same as 22 hours of storage. 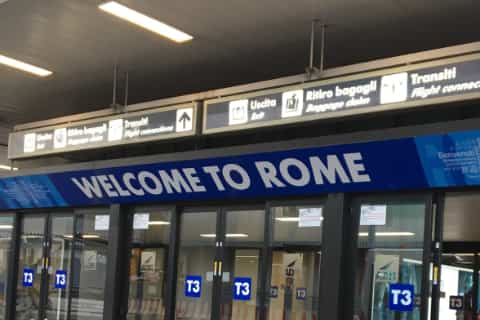 The airport has four passenger terminals, Terminals 1, 2, 3, and 5, but currently, only two are open. Terminal 4 does not exist, Terminal 2, although located between Terminals 1 and 3, is not in operation, and Terminal 5 is under construction for ‘extensive renovation’. The airport is relatively sprawling but has useful signage to assist passengers making their way through.

Terminal 1 and Terminal 3 are close to one another and passengers can walk between the two. When Terminal 5 is open a free shuttle service connects it to the rest of the airport as it is a satellite building. Terminal 5 ordinarily handles flights to and from the USA and Israel, though these have been relocated during the renovations.

Terminal 1 has some renovation and expansion work underway, forcing the closure of Terminal 2. T1 handles domestic and Schengen flights only. There is a single concourse in the terminal once through security which is home to the B Gates at the airport. The terminal is not the biggest, so travellers should not expect a host of retail options.

When headed down the pier for B Gates, B1 to B13 are on the same floor, with the lower numbered gates being closest to security. Gates B14 to B30 are on a lower floor accessible via escalator or elevator. B14-B25 gate access is between B2 and B4, with B27-B30 gates at the end of the pier.

Terminal 3 is the largest at Rome Fiumicino Airport and currently handles domestic, Schengen, and intercontinental flights, and so is the busier of the two terminals in operation. The terminal connects to C, D, and E gates. C and D gates are to the right when passing through security with D gates extending down a pier. There should be little complication finding these when following the in-airport signposts.

However, E gates are not as simple, and passengers should take note of their gate number as the distance between the various gates is relatively large. Gates E1-E8 are the closest to the check-in facilities, with E11-E24 gates branching off from above gate E5. E51-E61 are to the left of the security and check-in area.

Gates E31-44 are a shuttle train ride away as the departure area is some distance from the main terminal. Passengers must only proceed to these gates when they are happy they have nothing left to explore in the terminal building as it is not possible for departing passengers to return.

Despite serving the city of Rome, Fiumicino Airport is on the Italian coast in the fishing town of Fiumicino. Passengers looking to get to Rome itself will need to make a further 30km+ journey. Thankfully, there are many options to reach the capital of Italy to suit every budget. 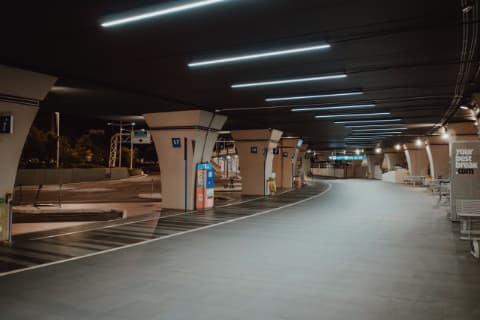 Bus: The Terravision bus is one of several companies that have local bus connections at Rome Fiumicino Airport, but is perhaps the easiest for passengers to make their way to Rome. For €7, travellers can depart Terminal 3 to the city centre Termini station. The buses can fill up quickly, and Terravision recommends passengers arrive fifteen minutes before the scheduled departure time else they may not get a seat. Further information is on the Terravision website. Alternatively, the SIT shuttle bus service also has €7 options with details available here. Expect a journey time of around one hour.

Train: With Rome having such a congested road network, the train is often the quickest way into the city centre. The Leonardo Express rail service takes 35 minutes to reach the central Termini station with departures twice an hour. Tickets cost €15 for a one-way journey, so they are not cheap. Passenger can save a euro by purchasing tickets online beforehand if their date of travel is within seven days. Alternatively, the regional FL1 train line has tickets available for €8 but does not travel to Termini. This option should be a consideration if a travellers destination is accessible via the metro line stops that connect to the FL1 train line.

Metro: Rome has a metro system, but the lines do not reach the airport. However, it is possible to connect to the metro for passengers willing to be flexible with time by taking either the train or bus services to a metro station. This flexibility can save money, but will generally take longer as travellers will need to wait for at least two transport methods. The cheapest route from Fiumicino to Rome is to combine both bus and metro. The COTRAL bus to EUR Magliana will cost €2.50, and then travellers can switch to the metro to the city centre for €1.50.

Car: Car rental is available for any passengers who prefer the freedom of a vehicle of their own. However, if staying in Rome, costs can increase quickly as parking charges can add unexpected expenses with such limited space available. The usual companies operate at Fiumicino such as Avis, Hertz, Europcar and Sixt, as well as local operators. A full list and contact details can is available on the Rome Fiumicino Airport website.

Taxi: Fixed fee taxis operate from the arrivals area of both terminals. A €48 fee will apply to the city centre of Rome. Passengers should look for white or yellow vehicles when seeking a taxi ride. Depending on the traffic conditions of the day, it could take from 35 minutes to over an hour to reach Rome centre. Uber and other ridesharing apps are available also for passengers looking for alternative options. 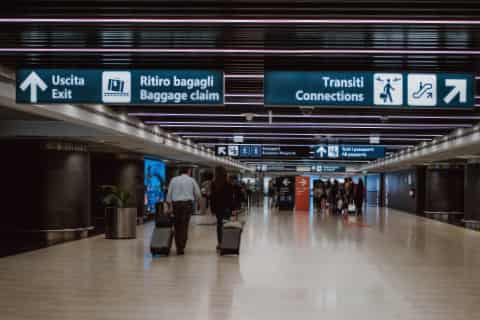 For passengers making their way through Rome Fiumicino Airport for a layover or connection only do not need to worry about the connection time if they purchased their tickets directly with the airline or an online travel agent. The time required to make the connection will is accounted for by the airline when the booking is made. If a delay were to occur, leading to a missed flight, the airline is obliged to find alternative transport or accommodation for passengers to reach their destination.

On the other hand, if a passenger has purchased two separate tickets and are connecting at Rome Fiumicino Airport, then they will do so on a self-transfer. A self-transfer treats each flight leg individually, and as such, any checked luggage will not be transferred to the next flight. The traveller will need to make their way through to baggage reclaim and check themselves onto their next flight. This extra step adds significant time and as such travellers should allow at least 2 hours to connect, if not longer. It’s possible either that an arriving flight, departing flight, or both could be at gates E31-44 which connect to the airport by a shuttle ride further extending the transfer time.

Passengers have several options for lounges when at Rome Fiumicino Airport. With Terminal 3 being the largest terminal at the airport, it’s no surprise that most the lounges are situated there. Alitalia has several lounges, as expected for a home airline. Terminal 3 caters for business travellers well with every airline alliance having a presence. There are also independent lounges so economy passengers can pay for entry. 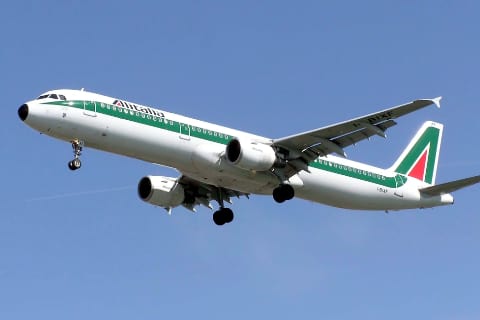