An Ethiopian Airlines A350 carrying freight from Riyadh to Bangalore had to divert to Mumbai Airport following a hydraulic leak. The plane had 8 crew onboard and was one of many of Ethiopian’s cargo-only flights on passenger aircraft. The incident occurred yesterday on 8th November and the plane is currently on the ground in Mumbai.

Ethiopian Airlines flight ET690 was scheduled to fly from Riyadh, Saudi Arabia, to Bangalore, India, on 8th November. The flight left Riyadh at 10:23 AM local time and began the roughly 4.5 hour flight to Bangalore. However, two hours and half hours into the flight, just off the west coast of India, the plane took a northward turn for a diversion toward Mumbai.

The aircraft safely landed an hour after the turn at Mumbai Airport at 17:14 local time, 4 hours and 20 minutes taking off from Riyadh. Data from FlightRadar24.com indicates that the aircraft has not taken off from Mumbai yet, nearly 20 hours since the incident.

The plane involved in the incident, registered ET-ATY, is a 3.8-year-old Airbus A350-900, according to Planespotters.net. The plane was delivered new to Ethiopian Airlines in January 2017 and has since been in service. This flight was cargo-only and only had 8 crew onboard, none of whom were injured. 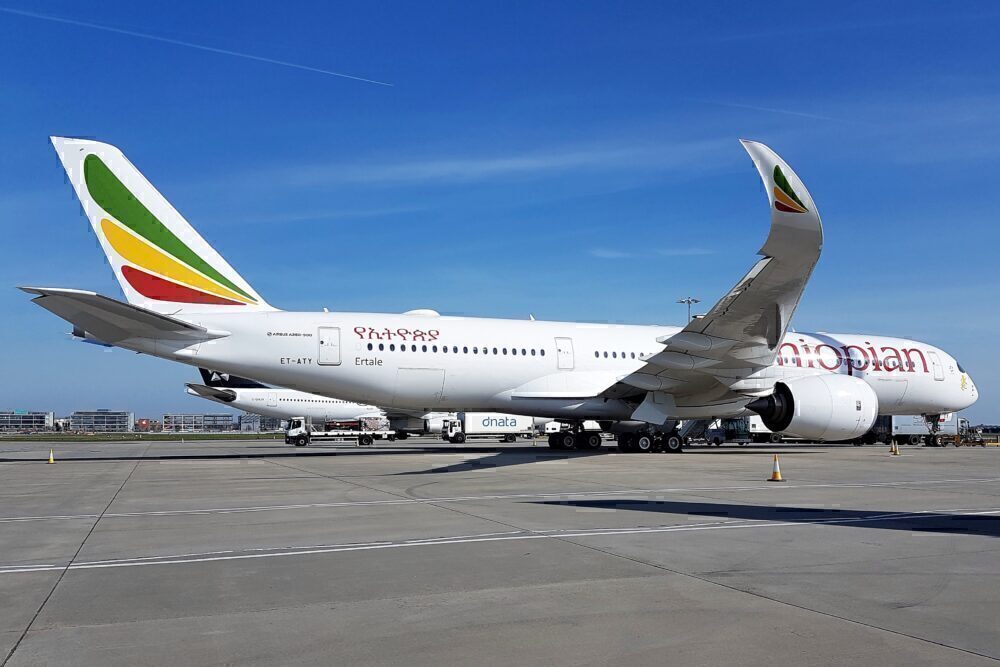 The aircraft involved in the incident pictured here) is a relatively new A350-900 Photo: John Taggart via Wikimedia Commons

According to The Aviation Herald, the aircraft suffered a hydraulic leak while 160nm away from Mumbai, no further details are currently known. The crew decided to quickly divert to Mumbai and did so in an hour after detecting the fault. The aircraft landed safely in Mumbai and no crew were injured. The plane will now likely undergo maintenance before returning to Addis Ababa for a thorough inspection.

Africa’s biggest airline, Ethiopian was one of the early adopters of the “preighter” trend, which are passenger aircraft converted for freight use. This involves removing some or all seats to make more room for cargo. The airline has converted over 20 planes into temporary freighters, including four A350s.

The airline has been taking every opportunity to increase cargo utilization, including using Boeing and Airbus delivery flights for humanitarian aid. Two more A350s (along with a new business class product!) joined the fleet this week as the airline slowly scales up operations once again.

Ethiopian has seen its market slowly recover as well, reaching 40% of pre-COVID capacity as of September. The combination of cargo and repatriation traffic has allowed Ethiopian to survive without any bailouts that most other airlines have received. The next few months will continue to see a gradual recovery, even as Ethiopian plans a long-term path for itself.