WIZZ AIR launches 21 new routes to Milan Malpensa airport. The European low-cost carrier has announced the opening of its 29th network base, at Milan Italy. It has detailed plans to base five Airbus A321s at Milan Malpensa from July. It will add 21 new routes, in addition to the eight already serves from the Italian airport.

The new routes, which will gradually roll-out across July, cover 11 countries. They include six Greek destinations in Athens, Corfu, Rhodes, Santorini, Thessaloniki and Zakynthos. 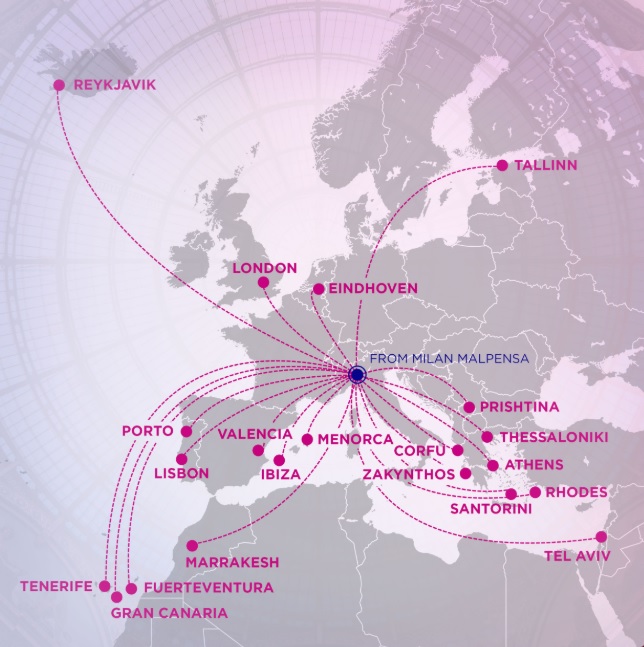 said: ”After 16 years of successful operations to Milan Malpensa airport, I am delighted to announce our newest base here, as we see the potential and the demand for low-cost travel in Milan and the Lombardy region We are dedicated to developing our presence in Italy, and offering more affordable travel opportunities to and from Milan, while keeping ourselves to the highest standards of our sanitizing protocols. Our state-of-the-art Airbus A320 and A321 neo aircraft, as well as our enhanced protective measures, will ensure the best possible sanitary conditions for travellers. Wizz Air is the lowest cost producer with the strongest liquidity position in Europe operating the youngest and economically most efficient fleet of aircraft with the lowest environmental footprint. With that in mind, I’m confident Wizz Air will make a profound impact on Italy’s economic development and the ramp-up of its tourism industry.”

“We are very proud that Wizz Air has chosen Milano Malpensa as its base in Italy” – said Armando Brunini, CEO of SEA Milan Airports. – “Once again, the market rewards Malpensa and confirms its ability to attract Airlines and investments. Despite the biggest air transport crisis ever, Wizz Air has decided to position its first Italian base in Milan. The work to recover the volumes of passengers from the pre-crisis it is obviously still long and very difficult, however, the response of the European and World airlines that are already planning the repositioning of their fleets on our airport is an excellent sign of encouragement not only for Malpensa but also for Milan and Lombardy.”