The scene at The George Inn. Photo: CPS

When living abroad one of the things I missed most about London was the comfort and coziness of a traditional pub (especially the Sunday roast!). Spain has its tapas bars and Germany has its breweries. Brazil has its botecos and Morocco has its tea shops. But what England does really well is the traditional old pub.

Today, many London pubs have been turned into trendy gastropubs, whilst other more modern watering holes have gone to great lengths to achieve an old-fashioned look.

Nonetheless, those pubs that have been carefully preserved for hundreds of years make the perfect spot for any visitor to soak up a bit of traditional English culture and see day-to-day London life in action.

London: 5 classic pubs that we love

Before you head out, read our guide to drinking at a traditional pub in London. Ready to sip a pint? Here are five of the best to kick-start your London pub-crawl:

Step inside the oldest riverside tavern in London. Photo: Enidanc

The Prospect of Whitby

This Docklands pub marks the spot where fishermen, sailors, smugglers and pirates used to stop off right back in 1520. Sadly, all but the flagstone floor was destroyed in a fire and the pub was rebuilt in the 1770s. In the seventeenth century, Samuel Pepys used to frequent this watering hole, hence the aptly named “Pepys Dining Room” upstairs. In more recent years the pub has attracted the likes of Frank Sinatra, Richard Burton and Kirk Douglas.

The Prospect of Whitby is perfectly positioned on the edge of the Thames making it an ideal spot to gaze out at the river and admire the city of London whilst enjoying the comforts of a real local pub.

Drink in the history of London at The George Inn.
Photo: Nick

Tucked away from the hustle and bustle of Borough Market and flanked by some of London’s most iconic modern buildings, the George Inn is a perfectly preserved little chunk of old London. The earliest reference to the inn is on a map dated 1542, however, the George had to be rebuilt after the Southwark fire destroyed the original building in 1676.

Today, the George is famous for its wooden galleries that characterize the front of the building. The simple, wooden interior boasts plenty of cozy corners to escape the cold and enjoy a good ale and in the summer months, the enormous outdoor terrace is popular with city slickers and market traders alike.

The beer taps at The Argyll Arms. Photo: Michael

Ever popular and ever special, the Argyll Arms is strategically located just off Oxford Street, making it the pub of choice for office workers, theatergoers and West End shoppers. Built in 1742, the Argyll received a makeover in 1897 when “snugs” became fashionable and the bar was split up into several ornately decorated little compartments so that punters could drink privately. Several years later regulators demanded that some of the partitions were removed to prevent “unsavory” goings-on and so the Argyll took the shape it has today.

The beautifully etched glass partitions and mahogany bar and paneling even survived the Blitz and the Argyll remains one of London’s most atmospheric pubs. Lovers of ale are also in for a treat as the Argyll boasts some of the UK’s finest cask-conditioned real ales and the selection is constantly changing, giving punters another reason to keep coming back.

A real treat hidden away in one of London’s oldest villages, The Holly Bush is one of those rare urban locals that manages to transport you far away to a rural countryside hideout. The pub opened in the early nineteenth century but is housed in a building that dates back to the 1640s and the original fireplaces, wooden booths and oak paneling are all still intact and beautifully preserved.

The warm, inviting ambiance of the pub draws you in, as do the many different dynamics going on as you meander in and out of the rabbit warren of rooms. From romantic whisperings on intimate tables by the fire and walkers refueling after a brisk stroll across Hampstead Heath to family get-togethers on long tables in the back rooms, this is a special place that embodies what a traditional pub should be. 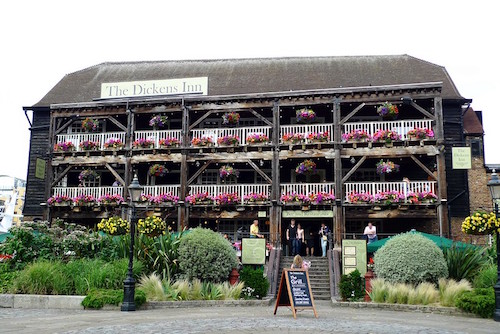 The Dickens Inn has a series of unique balconies where you can sip a drink. Photo: Ewan

A wonderful way to enjoy the calm of St Katharines Dock, the Dickens Inn is actually a relatively new arrival on the London pub trail. However, this inn has an interesting story to tell and is certainly worth a visit! The timber frame that houses the Dickens Inn was built as a spice warehouse in 1775 and was sadly encased in brickwork in the 1820s to fit in with the modernization of the dock.

Almost 150 years later architects discovered what lay beneath and, in order to save the building, they had to transport it 70 meters across the dock to make way for a new housing development. The timber frame was painstakingly restored in the style of an 18th-century balconied inn and was opened by Charles Dickens’ grandson in 1976.

Your favorite pubs in London

If you need even more ideas, check out our list of 10 favorite bars in central London. Do you have a favorite pub you’d suggest adding to our list? Tell us about it in the comments section.