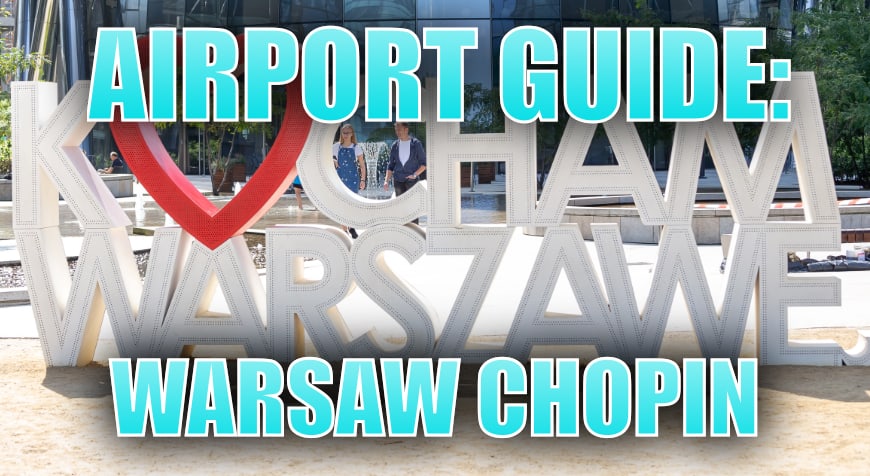 Warsaw Chopin Airport is Poland’s busiest airport and serves the Polish capital city of Warsaw. The airport is within Warsaw city limits, in the Włochy district, meaning it is often the best solution for travellers flying to or from Warsaw. If you have any travel plans to fly into or out of Poland soon, read on for our full Warsaw Chopin Airport Guide!

Warsaw Chopin Airport has changed a lot in recent times with the merging of the two terminal buildings into one complex as well as connecting to the rail network of Warsaw. The airport’s continual growth has led to a doubling of passenger numbers from the start of the 2010s to the end. In slightly older history, the airport changed its name from Warsaw-Okecie Airport in 2001. Okęcie, the neighbourhood in the Włochy district, is home to the airport, and some still call the airport by its original name.

Warsaw is also home to Warsaw Modlin Airport, and visitors should not mix this with Warsaw Chopin. Modlin is the base for low-cost carriers and opened in 2012 some 40km north of the city. Warsaw Chopin meanwhile has both short-haul and intercontinental routes with many traditional carriers. The Polish flag-carrier, and Star Alliance airline, LOT Polish Airlines has Warsaw Chopin as its hub and flies to over 100 destinations over the year from the airport.

Map: https://www.lotnisko-chopina.pl/en/terminal-a.html – An zoomable overview map with different floor selection options. However, there is no text overlay on the map to give any indication of gate numbers or facilities.

WiFi: Free WiFi is available throughout the airport. Connect to the “Chopin-Airport” network with no registration required.

Apps: Warsaw Airport has a free app available on both AndroidandiOS. 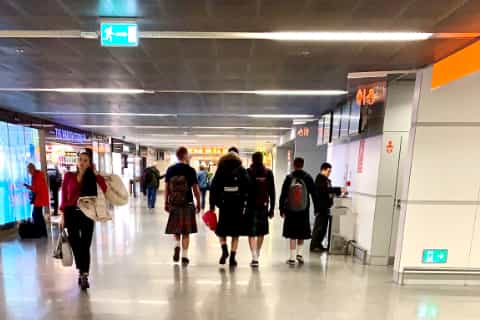 Warsaw Chopin Airport will serve passengers well enough when travelling through it. There isn’t anything important missing that travellers would generally need, but equally, there isn’t anything that especially stands out neither. The modernisation of the airport following the merging of the two terminals has helped Warsaw Chopin feel more modern, in particular with the older terminal 1 previously having many purple elements before refurbishment.

If running late, and are happy to pay for a premium service, there is a fast track facility available to speed through security. On the other end of the scale, there is an observation deck which is free for passengers to enjoy if they have time to spare. From there, visitors can enjoy a panoramic view of the airport and runways, as well as check on planes with the radar display screen. The observation deck is open from 6AM to 10PM.

Sleeping at Warsaw Chopin isn’t possible within the airport unless passengers can find some comfortable chairs to lie down on. Instead, all hotels are a short shuttle ride or walk away. The closest is the Courtyard by Marriott, which is across from the departures hall. The hotels/" 3142 target="_blank">hotel does offer lower-priced day rooms for any guests staying only between 10AM and 6PM. Other hotels in the airport vicinity include a Holiday Inn Express and Hampton by Hilton. A full list, along with prices are available at Booking.com where you will find the best deal for you.

Shower facilities at Warsaw Chopin Airport are available for free in two locations for departing passengers, or Schengen arrivals only. There are some nearby to the McDonalds food court in the toilets close to gate 32. There are also in the toilets at gates 24-25. Passengers looking to freshen up will need to have toiletries and towels of their own. Otherwise, several of the airport lounges have shower facilities travellers can use. We list these at the bottom of our airport guides for reference.

Luggage storage is possible at Warsaw Chopin Airport in one of the 27 lockers behind the bus stop in the arrivals area. There is a 24hr rate, payable in advance with storage allowed for a maximum of 72 hours. The fee is 12-16 PLN per 24hr period, depending on the size of locker required and a full guide on locker dimensions is available on the Chopin Airport website 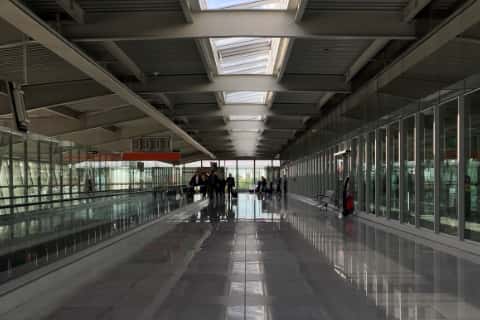 Warsaw Chopin Airport sometimes has reference to Terminal 1 and Terminal 2, but in the 2010’s the two terminals merged. The result is a single interconnected terminal which is named Terminal A. Despite having an A as a suffix that suggests there should be a Terminal B or Terminal C somewhere; presently Warsaw Chopin Terminal A is the only terminal at the airport.

South Hall and North Hall are what the old terminals now go by, with check-in facilities split between them both. Check-in desks A and B are in the South Hall (the old Terminal 1), and check-in desks C, D, and E are in the North Hall (the old Terminal 2). Once passengers have checked in and cleared security, they will be in a single shared departure area.

Although there is a single terminal, Schengen and non-Schengen departures split the gates, with gates 9-26 being for non-Schengen flights and all others for domestic and Schengen routes. Once passengers have made their way through security, any non-Schengen flight gates will be on their right-hand side with passport control separating the departure area. For any passengers flying to the USA, there are also additional checks once past passport control too. 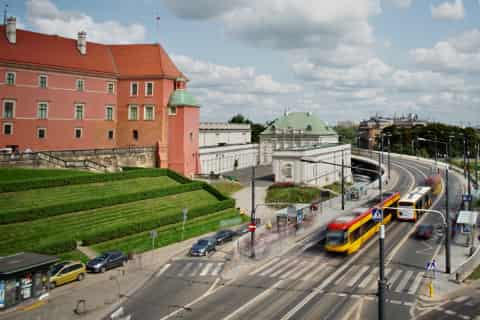 Unlike the smaller Modlin Airport, Warsaw Chopin Airport is within Warsaw city limits, and passengers can find their way to Warsaw city centre easily and quickly. With Poland co-hosting of the European Football Championship in 2012, Warsaw improved the transport connectivity of the airport by connecting it to the city’s suburban rail network.

Despite Warsaw being the largest city in Poland, it is relatively compact in comparison to other European cities. The airport’s proximity to the city centre means all transport options are quick. But the flatness of the city also allows travellers to cycle from the airport to the city centre of Warsaw in around 30 minutes if they travel light!

Bus: A bus terminal is close to the exit of the train station of Warsaw Chopin Airport and passengers can find several bus routes to central Warsaw. For locals, the bus lines also connect to several other areas around the city. For those looking to get to the city centre, however, bus 175 is best for travel as it passes through Warszawa Centralny and Plac Zamkowy with English announcements (Central Railway Station/The Old Town). The N32 bus runs to the centre at night also. A single journey will cost 4.40 PLN with payment available at kiosks at the bus terminal, or the machine in the bus. A bus journey will take around 30 minutes, depending on traffic conditions.

Train: With the connection of the airport to the suburban railway network, Warsaw Chopin Airport has been easy to travel to or from for visitors. The train is the quickest way for passengers to make their way to the city centre with a journey time of 20 minutes or under. Trains will depart the airport every fifteen minutes, and even more frequently during rush hour.

For travel into the city, travellers should take the S2 or S3 lines from the underground station nearby the bus terminal at the airport. There are multiple central stops available, with all of them covered by the zone 1 single 4.40 PLN one-way ticket. More information is available on the Warsaw Public Transport website, including other tariff types. Transport to other Polish cities is available from Warsaw Chopin Airport also.

Car: There are a large number of car rental companies available at Warsaw Chopin Airport, giving travellers the option to hire a car for their time in Warsaw. Offices for the major companies are in the arrivals hall area, with some other smaller companies having a presence on the mezzanine in the arrivals area. Passengers will find Avis, Enterprise, Europcar, Hertz, Budget, Sixt, and more at Warsaw Chopin Airport. For a full list of companies, including contact information, visit the airport website.

Taxi: Taxis will cost 40 ZLN for a journey between Warsaw Chopin Airport and the city centre with the airport only recommending the services of ELE Taxi and iTaxi. There are reports of scams in operation at the airport where officials who seem to be taxi dispatchers in the airport will offer services for a higher price. All official taxis have a meter, and the cost should not exceed much more than 50 ZLN when travelling to central areas. Uber does operate at Warsaw and fares can be as cheap as 20 ZLN.

Passengers travelling to Warsaw Chopin Airport as part of a flight connection may worry about their connection time. With the layout of the airport, connections are straightforwards, with Schengen flights being nearly effortless. For those travelling on one ticket that they purchased from the airline directly or an Online Travel Agency, then connection times are included by the booking system to ensure passengers catch the second flight. Even with a delay arriving into Warsaw, the airline will need to provide alternative transport options or accommodation.

If a passenger buys two tickets separately though, these elements of protection will not be in place. If any delays cause the traveller to miss the second flight, then they are liable for the entire cost of getting a new ticket. Even if there are no delays, the passenger will need to make their way through the airport and collect their checked luggage if travelling with any and then check it in again. If arriving from or travelling to a non-Schengen destination, this can also add significant delays as the passenger will need to clear immigration. As such, any flight delays could jeopardise the possibility of making the connection.

Officially, the minimum connection time at Warsaw Chopin Airport is an extremely short 30 minutes. However, this is for single ticket customers. For any traveller who is looking to make a self-connection, we would recommend at least 90 minutes if travelling internally within the Schengen Area, and 2 hours if not.

Warsaw Chopin Airport is not overly large, but there are still a decent number of lounges there. For any travelling with the flag-carrier airline, LOT, there are, of course, options as Warsaw is its hub airport. There are multiple choices for non-Star Alliance passengers too, though. Some lounges have shower options for any passengers who are midway through a long journey and would like to freshen up. If that is a primary concern for you and you are not travelling business class, there are free public showers in the departure areas, also, albeit not with any towels or toiletries.